With their curiosity and natural hunting instincts, it is uncommon for your loyal four-legged friend to cross paths with snakes. Dogs, being human’s best friend, are exposed to various situations with the possibility of encountering both harmless and dangerous animals.

As a pet owner, you understand the many reasons why you should own a dog, especially an American bully. Therefore, deciding that you won’t have a dog to avert possible snake bites is impossible. As such, you should be in the know of what to do if your dog gets bitten.

Just to mention, snakebites are common during summer as they come out from their hibernation. The cold winter condition force snakes to hibernate in a bid to save energy. That said, if your dog is exposed to a biting snake, below are some details on how you should handle the situation.

Types of Snake Bites on Dogs

There are approximately 20 venomous snakes living in the United States. Fortunately, not all species of snakes are harmful. Non-poisonous snakes often have a painful bite site that can cause infections.

These snakes, such as the Garter snake, lack fangs that produce venom. Instead, they have rows of teeth that don’t produce any venom.

On the other hand, poisonous snakes have fangs that produce venom. During the bite, there are chances that a poisonous snake won’t inject any venom when it bites.

However, the situation becomes fatal if they do, especially if immediate attention is not sought. Distinguishing bites between poisonous and non-poisonous snakes is of immense importance.

Snakes That Cause Complications

The severity of snakebites on your pooch depends on the type of snake. Some specific snakes have fatal bites, and dog owners should watch out for. Some of the snakes that cause complications include:

Understanding the different types of snakes makes it easy to identify the snake that bit your dog. Providing such information is helpful to the vet as they can easily identify a treatment plan.

Symptoms of Snake Bites on Dogs

The crucial part of knowing if that dog has been bitten is witnessing the snake bite happening or physically seeing the snake. However, if you didn’t witness or saw the snake, there are specific signs that are synonymous with snake bites.

Note that symptoms of snake bites appear within 24 hours after the bite. However, the effects of the venom take effect on the dog’s system immediately. The symptoms include:

What to Do Immediately Your Dog is Bitten

If you have confirmed that your dog has been bitten, based on the symptoms above, some safety measures can help save your dog’s life. That said, below are what you should or what not to do following a bite.

Identifying the species that bit your four-legged friend is the easiest way of diagnosing snakebites. This makes it easy to establish if the bite on the dog is poisonous or harmless. In most cases, the owner or anyone who witnessed the bite makes the diagnosis of snakebite.

Regardless, if you suspect that a snake has bitten your canine friend, don’t hesitate to rush him/her to a vet clinic as an emergency. Always try to remain calm to prevent your dog from sensing panic.

Don’t allow the dog to walk, but instead carry him as you provide reassurance with voice and actions.

Before taking the dog to the hospital. Don’t try home remedies such as the use of tourniquets and ice packs. If possible, bring with you the dead snake or take a picture for easy identification and diagnosis by the vet.

The veterinarian will determine the best treatment intervention based on the information provided. Some vets prefer using a snake venom detection kit to make their diagnosis.

Treatment of snakebites is hugely reliant on the type of snake. For non-poisonous bite, the bite wound is cleaned thoroughly, and the vet will prescribe antibiotics, antihistamines, and anti-inflammatory medications accordingly.

For venomous bites, an anti-venom will be required. The vet will also locate, mark, and clean the bite site. The remaining treatment plan will depend on the severity of the bite and type of snake that caused the condition.

The poison injected by the snake can cause shock, paralysis, and constriction of the windpipe. As such, you should remove the dog’s collar or harness to ensure that the airways remain unrestricted if the body swells.

You should as well be prepared to provide rescue breathing to the dog at any time.

Note that though anti-venoms are available, veterinarians don’t prefer using it. This is because there is no universal anti-venom that can be used. Besides, the costs may be prohibitive as well.

As such, most dogs suffering from snakebites are treated symptomatically for swelling, pain, and infection. Anti-venoms are used if chronic respiratory distress occurs.

Probably the most important goal of seeking medical attention after a snakebite is getting immediate recovery. Fortunately, the odds of your dog surviving the bite are high if the dogs receive immediate veterinary treatment.

Conclusive studies show that the prognosis of snakebites and full recovery depends on several factors. The size, age, the health status of the dog, and the time taken before receiving treatment determine the chances of prognosis of the dog.

In the event of successful recovery, close follow-up is essential for the assessment of wound healing and testing to evaluate how the body systems, muscles, and other organs are coping with the treatment.

During this period, ensure that you find the best dog food for your American bully that will ensure a speedy recovery.

The majority of snakebites on dogs occur when the pets are in the wrong place at the wrong time. Therefore, you should put several prevention measures in place to avoid such situations.

Among them include keeping your backyard clean, vaccinate your pet, keep them on a leash, and snake-proofing your yard. Regardless, if you can’t avoid such accidents, the guide above will help you get a starting point following a snake bite.

Signs That Your Dog Is Pregnant and What to Do 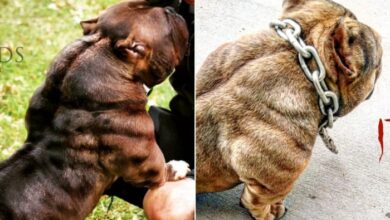